Talon Gallery presents an interview with

Born, raised and currently practicing in the Netherlands, Roos is a spectacular painter who has shown in galleries across the globe.In her “Storytellers” series she forces the viewer to focus on the expressions and identifying features on the faces of her subjects by hiding other areas behind braids or thick cloths of hair. In some instances the hair is posed in such a way as to resemble restrictive bindings or torture devices.

What do you love most about the place you live? How does it influence your work?
I’m currently based in Arnhem, the Netherlands. It is the city I moved to because of Art school. I graduated and simply never left (so far..). But it is not the city nor the country in particular that influences me most. My house and my studio in the garden are the places that do. These places are the most important to me. They could be placed anywhere on the planet for that matter. I move around this space most of the time, it’s where I work and sleep and eat and laugh and cry, it’s my safe haven that has all I need. 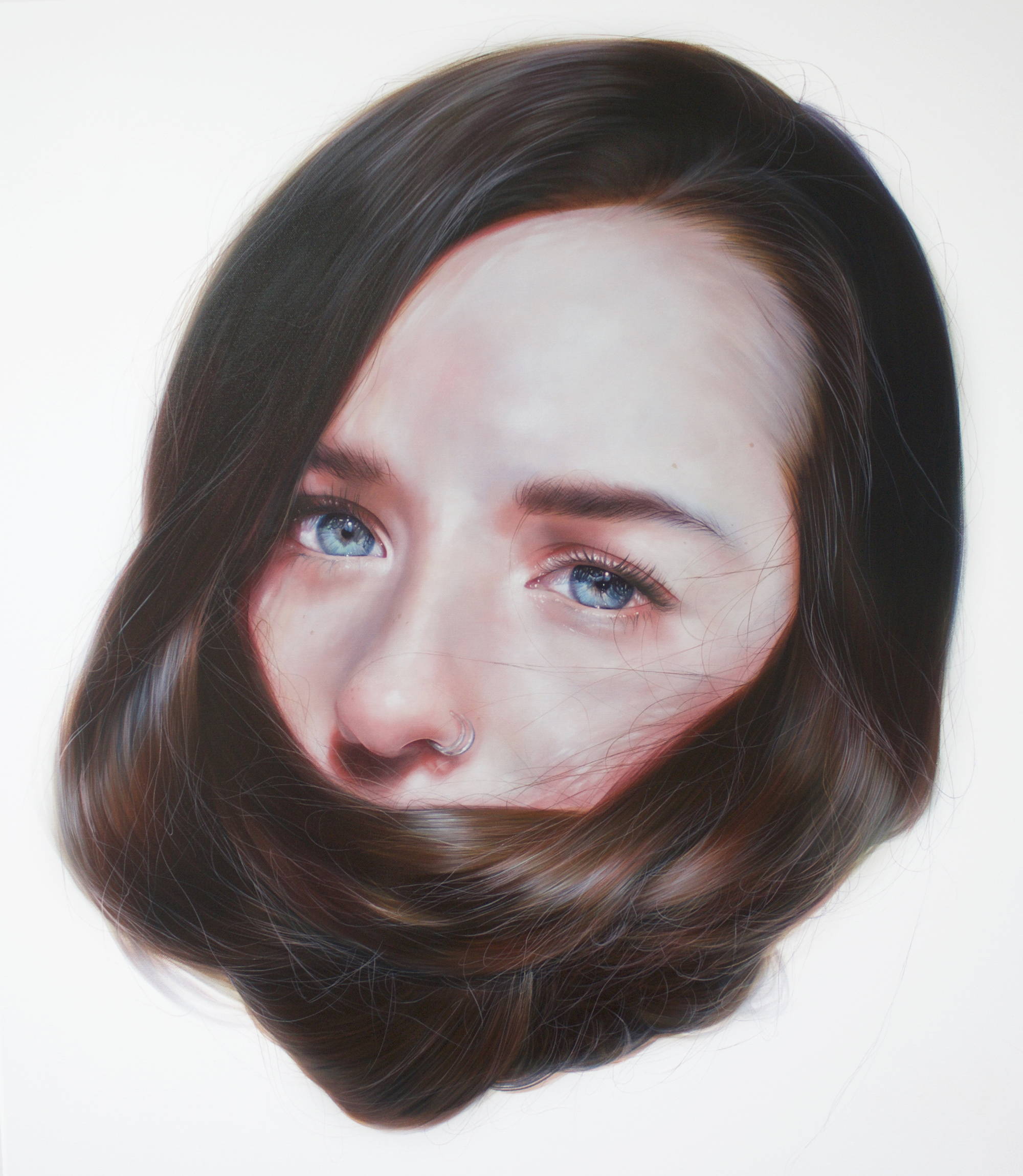 How do you feel your education has impacted your career?
My time in Art School was not an easy time. In Dutch Art Schools the focus lies on developing the concept behind an artwork rather than developing certain skills, which means I learned most of the techniques on my own. I’ve been challenged in a way I couldn’t have possibly been challenged. I learned to think about my processes and my ideas independently. And it taught me about self-discipline. I had to experiment a lot and make stuff I didn’t want to make. I even made stuff I deeply and utterly hated. But in the long run, it made me less vulnerable, in a way. You don’t need an education to consider yourself an artist, but it gave me the opportunity to take all the time I needed to become a better one.

Can you tell us a little bit about the larger “Storytellers” series and also about the influences and inspirations behind this particular body of work?
I recently finished number 27 of the series and it’s like the story keeps on developing while I’m painting. I make these paintings rather intuitively, don’t want to think too much because I don’t want to spoil them by overthinking. But while the series is growing, the story behind them becomes more complete, more vivid.
The idea behind the series is that we humans tend to think that we are all small islands, and unique beings. We place ourselves in the centre of the universe, which is understandable, since we only have our own pair of eyes and our own vision as a gateway to how we perceive the world. But in the end, we’re only here for a very short amount of time. Because we are such complex creatures, it’s almost unbelievable that when you look at us from outer space, we have no impact on the bigger picture. We are almost invisible even. Strangers in a world that already exists for billions of years, while we as humans do not. A person is born and has to cope with that, like everyone else, with only one chance to get it right. And then there’s me, making art. It almost seems silly doesn’t it? And it is! That’s exactly what my work is about. Because it’s pretty big thing to be alive. Thinking about that alone is already enough to keep me busy for the rest of my days. The models I chose like to hide from the world, because it’s kind of overwhelming, it’s a lot to handle. That’s what my Storytellers are about: they just observe, hiding behind their hair. They want to be visible, but don’t feel the need to talk.
You’ve been working on the Storytellers over a number of years, do you feel the context or message of the work has changed at all due to recent social and political issues?
Ah that’s a good one. I’m a left-wing vegan, and an angry one sometimes. Frustrated when I look at this world and how we managed to destroy it in such a short time. We know so much but act so little. Most people are still ignorant despite of all the knowledge we gained over time. That’s what worries me the most. Most of us are selfish beings, too busy saving our own skin at the expense of others and this planet. We’re focussing solely on our ego, on making money and impressing the people around us. I’m not making any political statements in my paintings though. Although I feel the need to do so sometimes, because art has the power to provoke and shock, my work is not meant to be that. My paintings are more like the eye of the storm, a silent moment in which we can stop running for a sec. I want to confront the viewers, almost forcing them to stand still and look back. Awaken them.
What led you to make hyper-real portraiture, particularly the idea of incorporating hair and braids in this distinctive way?
By painting only the small parts of the body, a face, hair, eyes, I’m making my world smaller and more focussed. I want to get really close to the skin, so close to reality that it almost feels real. Although it eventually never will be, it does seem to give me a certain feeling of control. When it comes to the whole hair-and-face concept, it’s about silence. Silence can be a lot stronger than words. Not talking creates a void in which other ways of communicating can take place. For me, hair is more often than not a tool to cover parts of the face, particularly the mouth, as to remove superfluous matter. But also to let the eyes stand out even more. In some of my works the hair is hiding the whole face. What remains is just the periphery, like a shell or a cocoon. 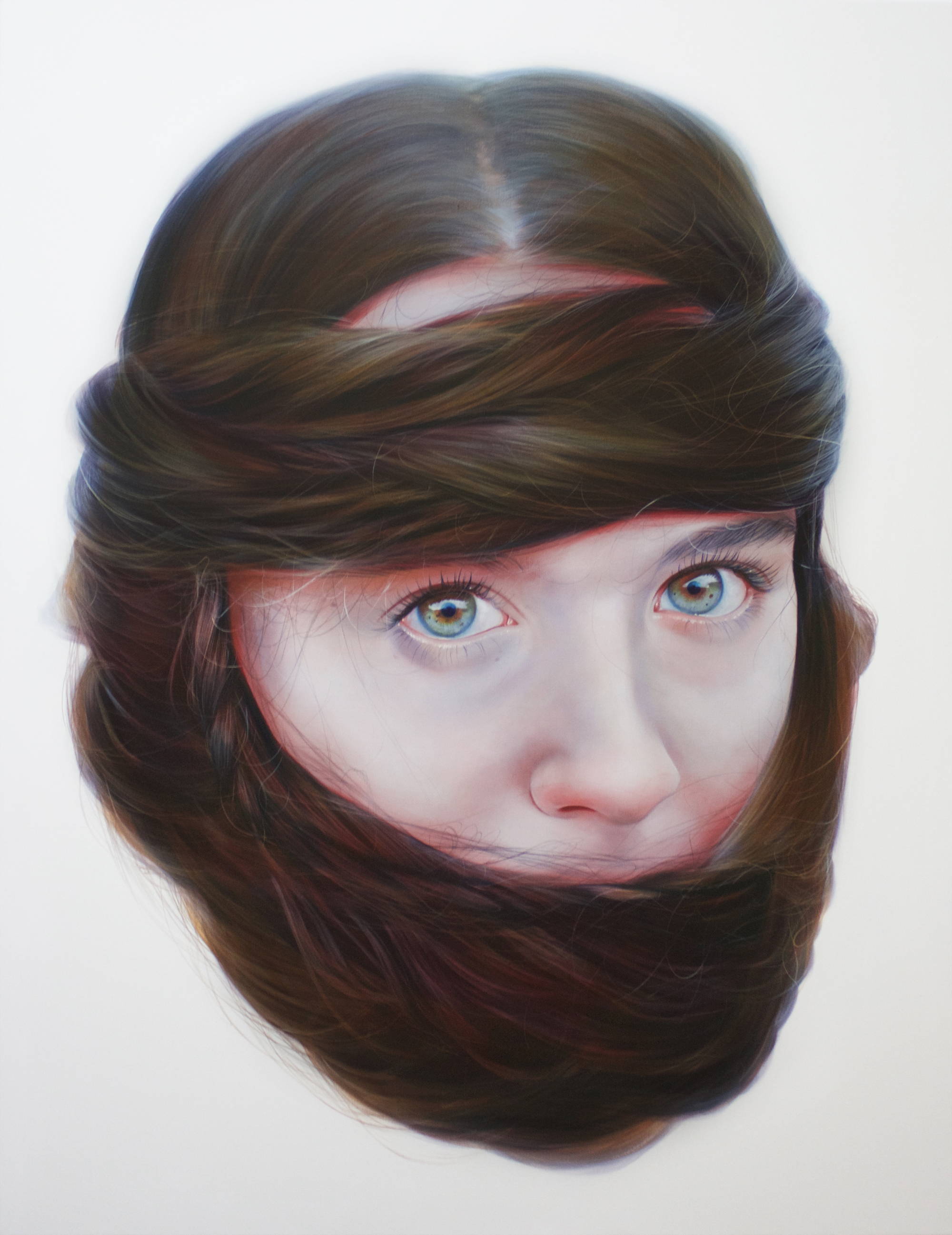 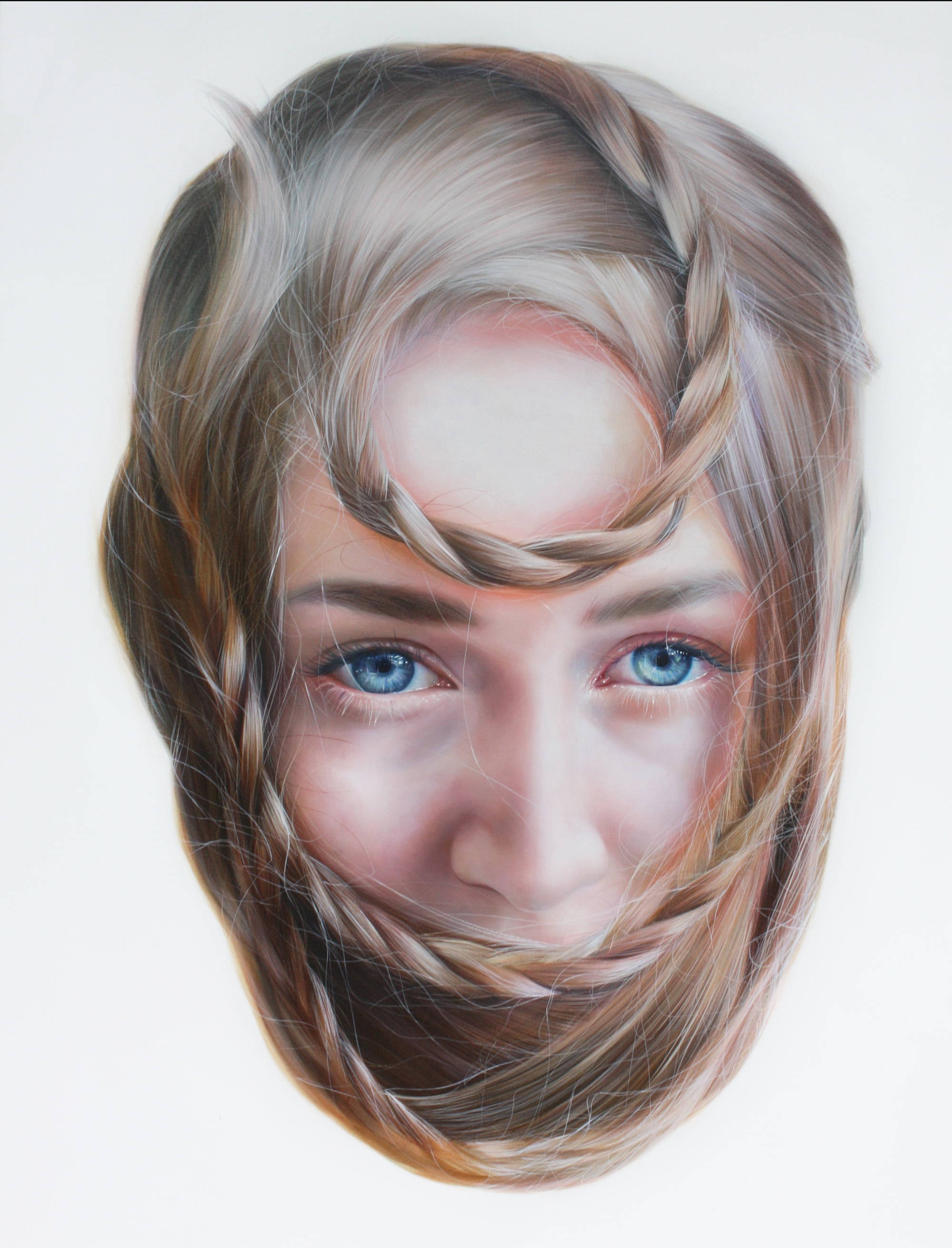 There is a soulfulness which is captured in your subjects, particularly in their eyes (when visible). Do you work from reference photography of professional models and do you take your own photographs?
I make my own photographs. Most of my models are not professionals, they are friends, family, fellow artists, and nowadays I even receive messages from girls and women that recognise themselves in my models and want to become part of the series, which is incredible. For my paintings I always look for a certain type of woman. Even now, after having painted 27 Storytellers I still don’t exactly know what makes me gravitate towards someone. Maybe it’s in the way they carry themselves, maybe it’s about their eyes, or maybe it’s because there’s something familiar going on, almost as if we
could be related. It’s an eternal quest, really.
How much does the quality of each subject/photographic reference impact the finished piece?
I want to capture the soul of each model, share their story. Which is quite hard given the fact that the only thing I have while painting is a flat picture. That’s why I prefer to meet my models, talk to them, get to know them before making the pictures, so that the images are only there as a mnemonic. I can’t work without them but I try not to depend on them too much. During the process the painting changes all the time, it hardly looks like the original photographs when it’s finished. That’s why I always point out that I’m not a photorealist. Realism is just a tool for me, not a goal. 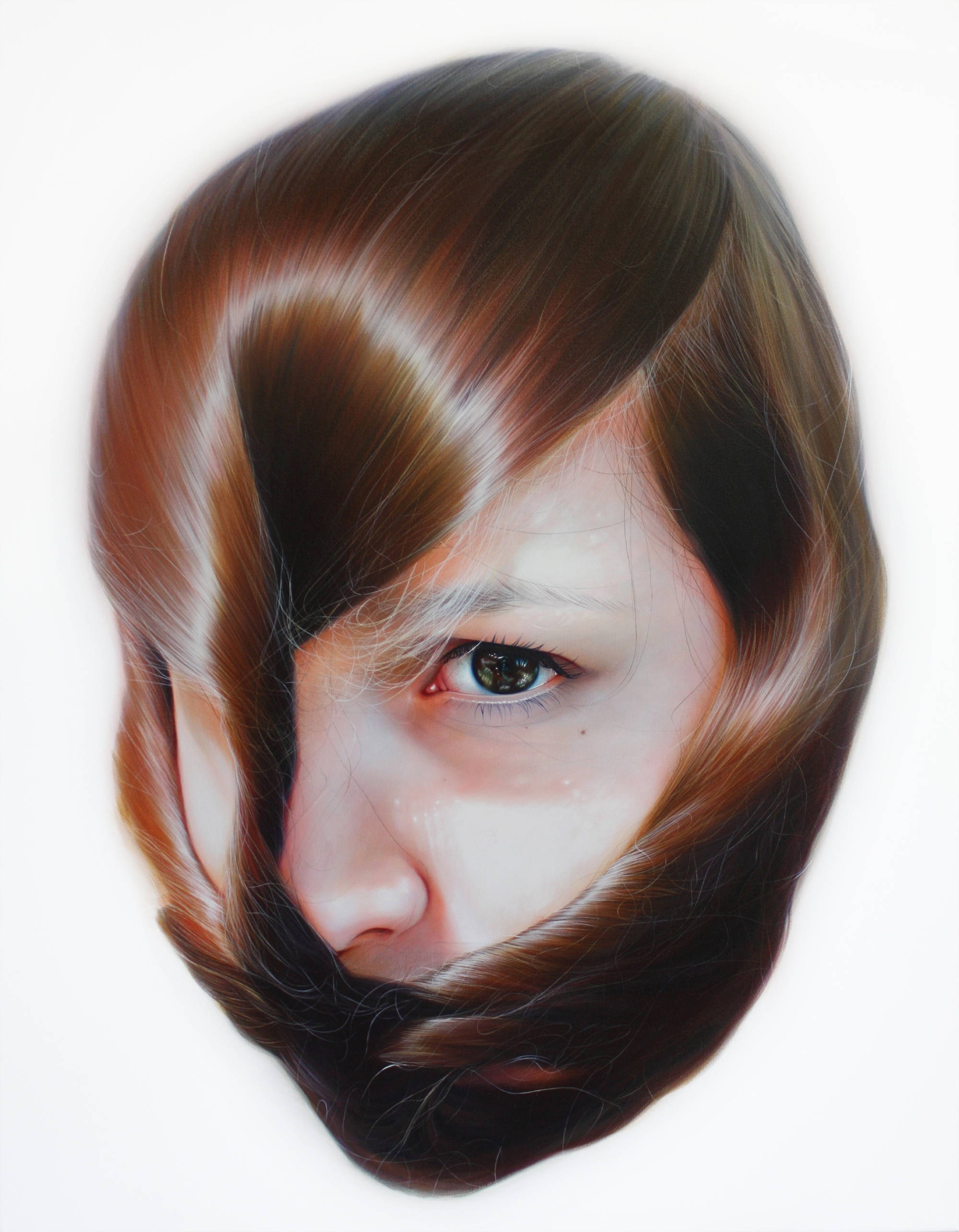 What do you find the most challenging/rewarding aspects of being a professional artist?
The most rewarding is the process of painting itself. But being a professional also means being ‘out there’, reaching a public, making enough money, etcetera. That is what I consider - although I eventually enjoy it most of the time - as the challenging part. The most rewarding thing of my profession is that I can sit in my studio and work for hours and hours with nobody else around, being able to hear myself think, and on the good days, hardly think at all.
Do you listen to/watch any form of media while working? If so, what is it and how does it influence your process?
I always listen to music while working. I have several playlists that I made for different moods and for different purposes. When starting on a painting, I usually listen to classical pieces, minimal stuff like Canto Ostinato by Simeon ten Holt. But when a painting needs to be finished I can easily switch to techno. And in between, there are so, so many genres… I can even remember what I was listening to working on a piece from years ago.

What projects are you excited about in the coming year?
The year is starting with the Supersonic Art invitational at Spoke Art in New York city, I’m participating for the third time now, and everytime I’m so excited to be a part of it. It’s a great reason to fly to New york again. Shortly after that, it’s time for my solo at KochXBos Amsterdam, where I’ll be filling the space with a whole bunch of new works that are yet to be made, but most of them are already floating around in my mind. Knowing that I can focus on creating all these new, different paintings for the next half year is awesome. I’ll be playing and experimenting more than ever before.
Huge thank you to Roos van der Vliet for her thoughtful and facinating responses!
See more of her work via her website - http://www.roosvandervliet.nl/
© 2022 Talon Gallery.